Transform Your Home | Book an Appointment

Do you live in the Midtown area of Houston? If you’re looking for a trustworthy, experienced home remodeling company in Midtown, Premier Remodeling is the best choice. 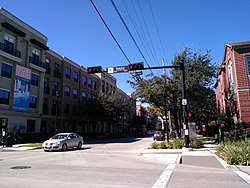 We are proud to serve the Greater Houston area, including Midtown:

Midtown is a central neighborhood of Houston southwest of Downtown Houston.

Separated from Downtown by an elevated section of Interstate 45 (the Pierce Elevated), Midtown is characterized by a continuation of Downtown’s square grid street plan, anchored by Main Street and the METRORail Red Line.

The area is bordered by Museum District (south), Montrose (west), and I-69 to the east.

With an estimated population of around 9,000, Midtown is an area known for its vibrant nightlife. The area is peppered with restaurants and bars.

We love Houston, and we love remodeling Midtown homes.